In most walks of life, an invoice is something you pay on. In fact, if you look it up in the dictionary as a verb, “to invoice” someone is to send them a bill, basically. But in our particular ecosystem of tolls, transponders, trucks and the people who make it all work, an invoice is something different, at least currently. An invoice in our world—more often than not—is actually more of a monthly statement, looking back at the previous month. By and large, you don't pay on your invoices to us.

What you do pay on for us is something called a Replenishment Request—which is how we refill your “toll tank” to replace the toll you’ve used. Now one might be forgiven for missing the distinction when you look at the actual emails that you get—because the format is fundamentally identical. In fact, the invoice even has a little space on it for the amount that you would pay, but don't be fooled! If you look above that very space where you can enter how much you're going to pay, you'll see—if indeed we are looking at an invoice here—the amount due is probably zero.

If ever you need a set record for a given month’s postings—either to do billing for subcontractors or other accounting purposes—the invoice is what we recommend using. Certainly, you can pull toll out of the web portal at any time, but the invoice has all the details you need along with other factors that impact cost, like credits and discounts.

It's worth noting, in the web portal both Invoices and Replenishment Requests show up under the accounting tab but seem to be labeled as invoices only, while the section actually contains both items. And like any other data that we save for you, it is accessible at any point going back to when we first met. In all likelihood you never had to pay on an invoice with us, but you have pre-paid for your toll by replenishing your account.

Without getting too deep into the thicket, there are very good reasons why the Invoice isn’t an “Invoice” in a traditional sense. In short, it used to be. There are a handful of people who started out with us way back when, we’re talking the “early oughties,” when this brave new world of toll management that we see today was in its infancy, and most people did both pay on the invoice and pre-pay for certain other services. It involved requiring a bond on the account and had a lot of moving pieces I won’t detail here.

The naming convention (calling it an “Invoice”) is a legacy from that time. We look to set up everyone with prepay now—it is actually much more straightforward—but that history is still with us. In fact, there're still a few legacy accounts who have been with us from the beginning who still do prepaid and postpaid both. We are in the process of converting some of those today. But for almost anyone who signs up with us now they will do pre-pay without exception i.e. no post pay. The term “invoice” has become a vestige of a process that’s evolved over the last few decades.

For those pioneers still with us, it still is an invoice in the traditional sense, but your actual experience will not follow that model. There is some internal discussion about changing the terminology, so stay tuned…

How it all Works

Aside from the fact that you usually don't pay on an invoice unless you are a legacy, there are other differences between Invoices and Replenishment Requests. One of the main ones is their timing. An invoice will come out at roughly the same time monthly—and by “invoice” please understand I mean account statement. It will come out between the seventh and 10th of the following month, like clockwork. The RRQ’s (Replenishment Requests) however, are not scheduled to occur at the same time every month, because their timing depends entirely on when you reach 50% of your surety.

Your surety is the estimate of what you’ll likely use for toll in a given month. The system calculates and adjusts this amount based on the toll data you’re posting, using a three-month sample to continually calculate. We can also change the surety at your request (and lock it for periods). In that regards, the prepay system works like any other—a prepaid phone or a gas tank—and is straightforward. You load the account so it will have money on it when you post toll. 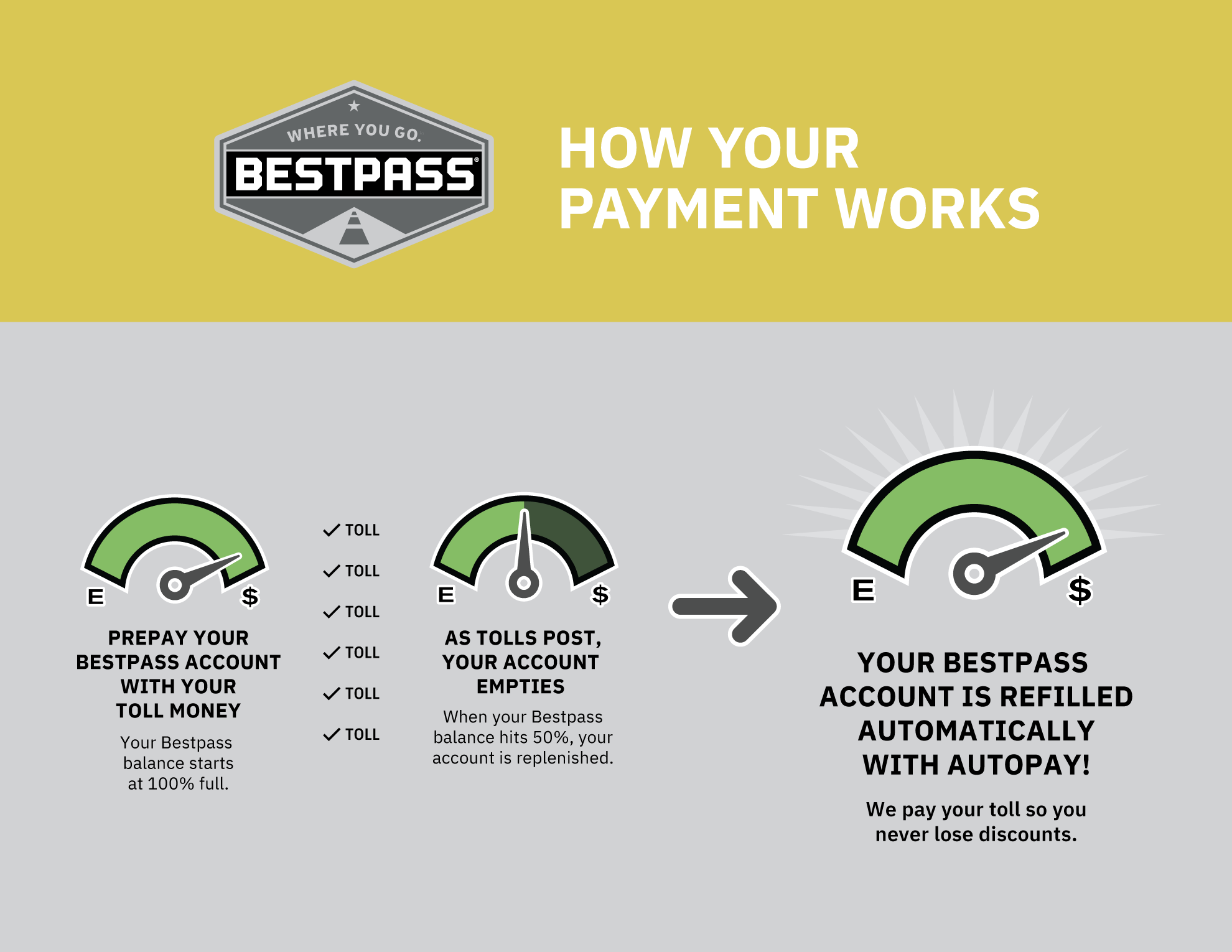 Where the potential for things to seem less straightforward exists is when the Invoice and RRQ get intermingled in the same question. One is an invoice you don’t pay that looks back at the previous month, while the other is prepaying for toll you haven’t used yet based on current postings. I confess when I first started working with this system, I felt a little chronological whiplash. But then I slowed down and looked again. I asked a few questions that made it clear again. This understanding was almost immediately put to the test because I got a call from someone who said that the same toll is on the toll file for the invoice and on the RRQ—thinking the toll had been double billed. But the toll on RRQ’s should always eventually show on an invoice. We reached understanding when I finally called out that the future should always eventually turn into the past. At least that was what I was trying to convey. I think I might have also dusted off that old Yogi Berra chestnut: “The Future ain’t what it used to be.” Either way, we got to a good place when we were able to establish they’re two different views of the same information.

One of the calls that we will regularly get will be regarding an RRQ that comes after an invoice. Any replenishment request that does not come immediately after an invoice should have a pretty much exact match between the amount we are looking to replenish and the amount of toll transactions since the previous replenishment request (assuming the surety doesn’t change). The replenishment request after an invoice, however, includes all the service fees, credits and charges from the account and therefore the toll file that comes with it might not match up to the total that were asking to replenish (i.e. Toll replenishment + fees - discounts). But if you backtrack and look at the credits, discounts, fees and other expenses it will always balance out. We are responsible for every penny that we hold for you. We can track every single expense or post on the account for its duration. In some ways we are like a financial institution, and those transponders are very much like credit cards—so we’re required to be accountable.

Pre-pay is Your Friend

I mentioned above that discounts are calculated when your invoice is created. You likely get two different kinds of discounts. The first one happens in real time and it is the electronic transaction fee being lower than the cash fee, one of the benefits of using a transponder. The other form of discount that you get is calculated at invoice time and applied to your account then. This is another reason why the invoice tends to come seven to nine days after the end of the month: we are waiting for the rebates to come from the tolling authority so that we can pass them along to you.

We do sometimes get calls from folks who don't fully get the idea of paying in advance for toll. It’s understandable—most things in our life are post-pay. It can seem like (especially at the beginning) you’re front-loading an account and paying for something that you haven't used yet, but it is exactly this pre-paying that gives us the ability to change when a payment is taken you need, to change the size of your surety at your request, and to give you the fullest possible view of your account with us. In short, prepaid gives us a tiny bit of wiggle room. It’s your toll and your money. If you want to adjust your surety or lock it at a certain level, that is a conversation we can have, because prepaid makes it possible.

Pre-pay also makes it possible for you to never get a Replenishment Request. If we make it big enough that you never reach 50% you would never get a Replenishment Request—you could load it up for the year if you want to, and know what you’re likely to post annually. There's also nothing that would stop you from paying on your account before your balance reaches 50%.—this too would pre-empt RRQ’s. Without pre-pay this wouldn’t be possible, and we would be essentially asking for bonds, in order to insure our investment, and focusing on your credit, rather than how to optimize your toll management savings and service.

The other thing that the invoice shows you is how little of the money that you pay actually goes to Bestpass. The rebates/discounts usually dwarf what you’re paying us. The lion’s share goes to the tolling authorities, and it is at that margin where we try to help. And it is a point of fact, having looked at thousands of invoices by now, I can say that with some confidence: we have saved you more money than we have cost you. I’m looking forward to seeing that trend continue.

Bestpass offers coast-to-coast coverage, all under one account. See how we can help you with toll management: bpass.us/3M8odzH #trucking #toll #fleet